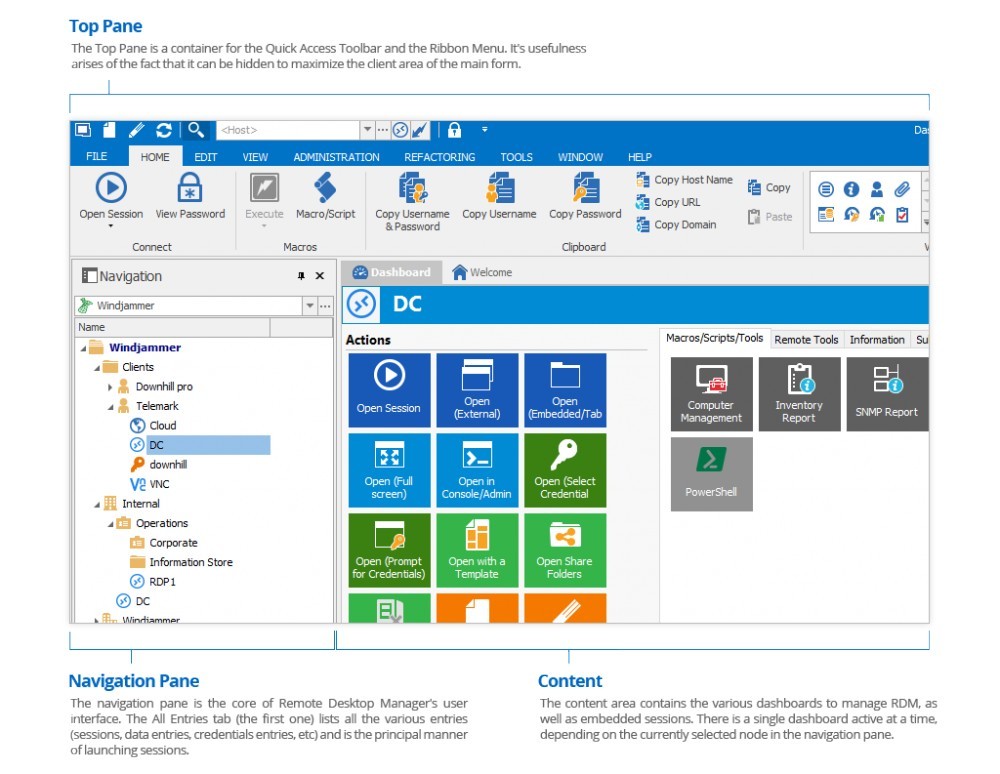 If you’ve ever had to connect to a remote desktop, you’ve had to at least use the built-in Windows tool – Remote Desktop Connection. While definitely bare bones and nothing fancy, it got the job done for an occasional remote session or two. But if you are regularly having to connect to multiple machines (often the same ones because you are managing multiple servers) or need to manage PCs other than Windows or other types of connections (e.g. SSH or FTP), then the limitations of this Windows tool become readily apparent.

As with other tool categories, multiple products exist that fit this niche, so I will start off by covering the two I have been using interchangeably on a regular basis. I may add others to this post in a future update as I come across new solutions in this category.

So the first tool I want to cover is the Remote Desktop Connection Manager (RDCMan) from Microsoft. It is a free download (link in the title above) which is described in this post RDCMan. As I understand, it was initially developed for internal use at Microsoft and was then made available publicly by the engineer who designed it. It adds to the basic functionality of the built-in Windows RDP tool by allowing you to consolidate multiple sessions into a single window. So all your remote connections can be saved and accessed through a single pane of glass.

It also allows arranging your remote desktops into groups to provide additional organization within the navigation pane. There are many additional options that provide additional functionality of this tool compared to the standard RDP connection that comes with Windows. You can set some defaults and apply them to groups, so these settings are consistently applied at every launch of RDCMan. 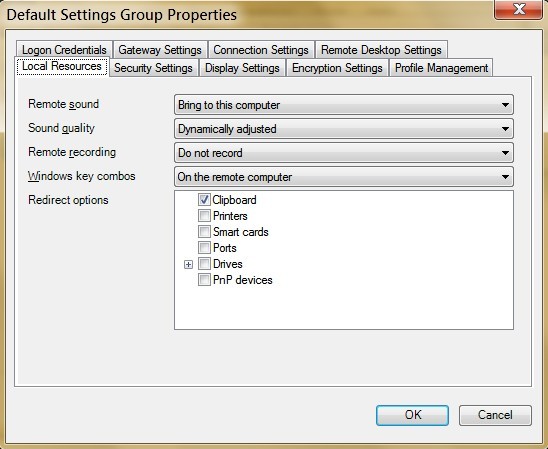 Also, these settings can be created individually for any device group to be uniformly applied to each device in the group. And inheritance can be broken, if needed, for different settings to apply to a single device. 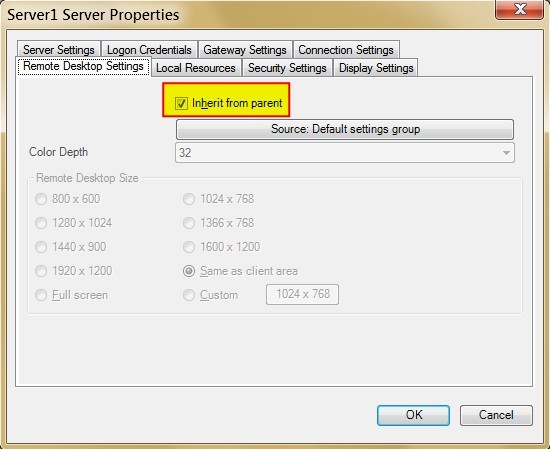 Remote Desktop Connection Manager is a pretty straight forward tool which is a great improvement on the basic remote desktop connection utility. At the time of this writing, the latest version of the program is 2.7 which was last published in 2014. So even though it is not being actively developed, it still supports most current versions of Windows for remote desktop connections.

What RDCMan does, it does well and without much fanfare, which also brings out its main limitation. Namely, it only supports remote desktop connections for Windows-based devices, which brings me to the next tool in my remote connection arsenal.

I have been using Remote Desktop Manager from Devolutions for several years now due to its versatility and rich feature set. The program is being actively developed with new features introduced and improvements made to the existing ones. It comes in both a free and a paid Enterprise edition (comparison chart) with a single license starting at $149 per user.

Where this tool really shines is in the sheer number of connection types it supports as well as additional utilities that are on board to further enhance its usefulness to an administrator. Some of the connection types included are:

The interface is much more polished compared to RDCMan above (which kind of has that Windows XP look to it).

With this more modern interface, the ribbon and the navigation pane are very customizable to fit the way you work. I particularly like and use the tree view in the navigation pane since I tend to organize my connections by either location or type and create groups accordingly.

While I primarily use RDP for most of my remote connections, I have other connection types configured in Remote Desktop Manager which I would have previously launched in their respective applications such as FileZilla for FTP, putty for SSH or VNC. It also allows me to remote into an Apple server. There is one remote server I use that requires a VPN connection to be established before I can remote into it. So without Remote Desktop Manager, I would have to connect the VPN first and then launch my remote session. With this tool and its many integrations, I simply configure the options for this server connection to launch the Cisco VPN client and once the tunnel is up, automatically connect to the server. Cool beans! This is made possible by one of a myriad of supported add-ons such as the Cisco AnyConnect VPN Client Add-on in this case. There are many, many others spread over seven different categories (add-ons). 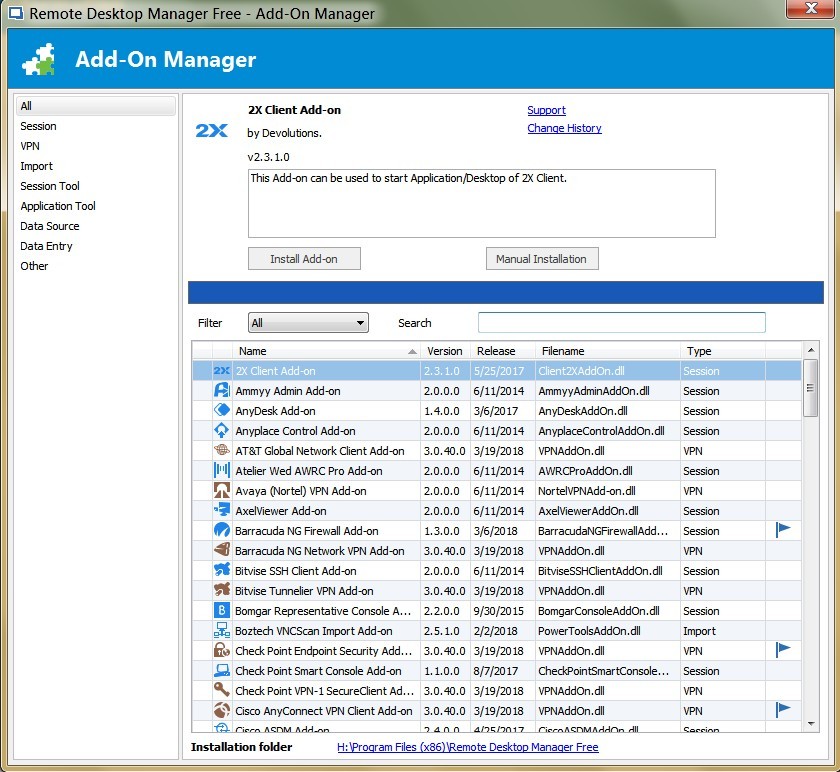 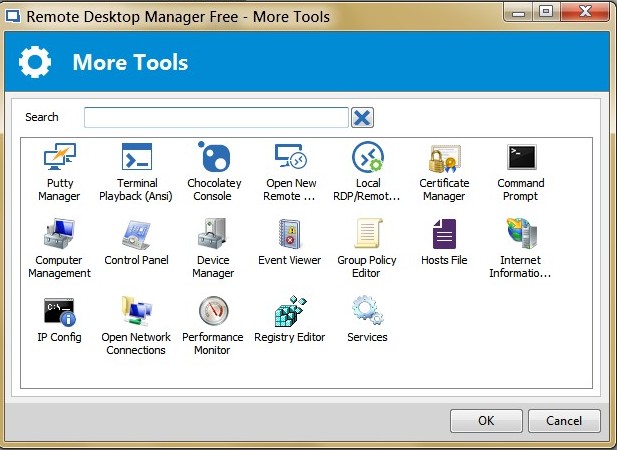 Just like RDCMan, Remote Desktop Manager allows you to save connection credentials and options in a database. With its Online Backup Service, the database can be saved to the Devolutions cloud preserving your connections and settings in case of data loss. This service is available in both the free and the enterprise editions. Of course, you could always use a local data source to store connection details. Remote Desktop Manager integrates an Advanced Encryption Standard (AES) algorithm to protect your local files and your sensitive data in the database. A mix of their own private key and a master password (passphrase) is used to create a strong encryption key (256-bit key).

The number of features, integrations and built-in tools is huge, making even the free edition more than sufficient for managing multiple systems and connection types in a variety of environments. Because of this versatility, Remote Desktop Manager sometimes takes several seconds to load, but given its usefulness I have come to depend on it in my day to day activities managing various systems. As mentioned above, the developers keep adding and improving functionality of the application, making it a trusted staple in any admin’s tool set.

By combining multiple tools and features into a single application, I find that Remote Desktop Manager saves me time whenever I use it. And since I can’t leave things well enough alone and enjoy tweaking the tools I use most to work exactly as I like, this particular application affords this opportunity in droves. Does that make me a control freak? Oh, well…

As always, I am looking forward to your thoughts, suggestions and other comments. Feel free to share your favorite remote desktop tool, and I may add it to a future post or as an update to this review.