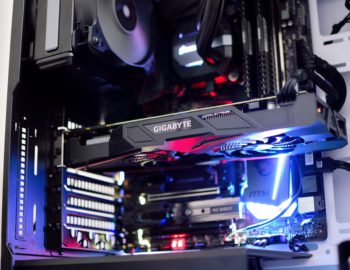 Most of my work these days involves either procuring, managing or troubleshooting software-related issues and longer range projects. There is some hardware stuff here and there, but since we now have a full-time help desk person to service and troubleshoot laptops, monitors, projectors, etc., I don’t really get to spend as much time in this area anymore. And sometimes I miss working with hardware such as displays acting weird, failed laptop drives, or other physical components you would typically find in an office environment.

An Idea That Has Been Brewing For Some Time

The last time I had built a PC was for home use back in 2010. Up to that point I have been building them for work which eventually spilled over into putting together a new machine for my home office when the old PC was about to bite the dust.

I remember really enjoying the process of picking out, shopping for and putting all the parts together. My son mentioned that he also remembers some swearing on my part during the final build stage… By the way, although that computer is a total dinosaur, it is still running to this day.

Since I don’t really use this old PC all that much (primarily for some remote work and browsing/streaming), there wasn’t that much of an urgency to upgrade it. Yes, some parts had to be replaced over the years primarily due to failure, but otherwise this PC had held up quite well given its age (7+ years and counting). Of course, using an older CPU and non-SSD drives makes it quite slow (especially booting up), but the fairly light loads described above did not render it completely obsolete.

Here’s the abbreviated spec list for this old machine just to provide some perspective:

We’ve had family conversations about upgrading the old workhorse over the years, especially when something wasn’t working as expected or the PC had been acting slow (although that wasn’t always due to the old hardware). But inevitably the subject of our discussions would turn to some other tech area and the upgrade project would once again be put on the back burner.

Well, since it’s been over 7 years now and much has changed not just in the tech world of PC hardware, but also on the home front, the topic of getting a new PC has surfaced once again.

My son (who is also a contributor to this site) has been into gaming for several years now across various platforms and has been pushing for an upgrade since he now wants to game on a PC and has volunteered to pitch in his own money and effort researching the components and putting everything together. My wife has also been supportive of the idea, so I suppose it had finally reached critical mass in order to make me actually start the process of researching how to build your own gaming PC.

As I was recollecting the steps I took during the previous PC build, I remembered them working quite well and did not feel like reinventing the wheel with this new build. So in this part of the build process I would like to share the steps I undertook researching and shopping for the parts that would comprise the new gaming desktop.

Hopefully, it might help some of you with your own building ideas. Of course, this is just my approach and I always welcome your input and/or constructive criticism, so feel free to contribute in the comments area down below.

Again, I have to give most of the credit to Eli for the initial research and ideas for this build as he is much more into gaming than I am. My typical use case would have made my approach to this build completely different as I am primarily concerned with basic office productivity and only occasional gaming.

If you have been building PCs and researching components online, you would have no doubt come across some helpful sites to help you with your efforts. The one I used for the previous build and was also using for this new one is PCPartPicker. I find this website quite useful whether you are just starting out and exploring or getting down to the nitty gritty and delving into detailed component research.

This post is not intended to be a review of PCPartPicker, but since it was quite instrumental in helping select, research and price out the components for our PC, I wanted to provide some extra details which I believe could be helpful with the overall process.

You can look at existing build guides to get some ideas and filter by build type, price, etc. I also liked the personalized reviews of various builds as well as ratings of individual components. Once you have some parts in mind, you can create a customized list (or two) which will have pricing automatically sourced from various marketplaces such as Amazon, Newegg, B&H and other online retailers.

If you are not in a hurry and just starting to put your parts list together waiting for some price drops, online promotions or simply setting money aside for your dream PC, PCPartPicker has some neat features to automate this process. First, you can sign up for regular emails covering any or all the parts on your build list to automatically notify you whenever there is a price drop.

Second, the website has a feature called Parametric Part Lists which provides additional flexibility for monitoring component prices by creating alerts not just for individual parts but for entire categories of parts with custom filtering. For example, you could search for the lowest prices of RAM based on brand, type of memory, etc. Any time you view the list, the lowest available prices are updated. And, of course, email alerts are also available for these lists.

We had a fairly good idea of what kind of CPU and graphics card we wanted to get for this gaming PC build. Now it was time to narrow these choices down based on price, reviews and our own preference as well as spec out the other components.

Since I had already procrastinated on getting this build put together, we decided to create the parts list rather quickly to get an idea of the total cost for this project first and then proceed from there. So what emerged was a rough “first draft” of the component list which came in at a little over $1,200.

We then proceeded to look at component reviews and the various pricing sources along with manufacturers’ websites. The latter was necessary when we needed more details than PCPartPicker could provide which I think is the website’s only shortcoming. This was also helpful in distinguishing similar components from the same vendor to see if perhaps a less expensive part would work just as well.

We went back and forth on some components which were close matches to save some money whenever possible without sacrificing performance or overall build quality. I won’t spend the time and bore you with those details of our process, so here’s the list of parts we ended up with for this build:

Eli was pretty specific about the type of display he considered good enough for gaming. In this case it had to have a one millisecond response time and run at 144Hz in order to take advantage of the higher frame rates (85 fps or more) that make most of the games easier to play due to increased performance and general usability.

So the parts have been ordered and now it’s just a matter of time – both waiting for the parts to arrive and carving out some time either during the week or on the weekend to start putting everything together.

This post will resume the build process in New PC Build – Gaming PC For Fun… And Work (Part 2), which will describe our experience with unboxing and assembling all the components described above as well as verifying and testing their functionality. Eli already has some games he got through Steam that he has been itching to try running on the new PC. So stay tuned and don’t forget to comment below!