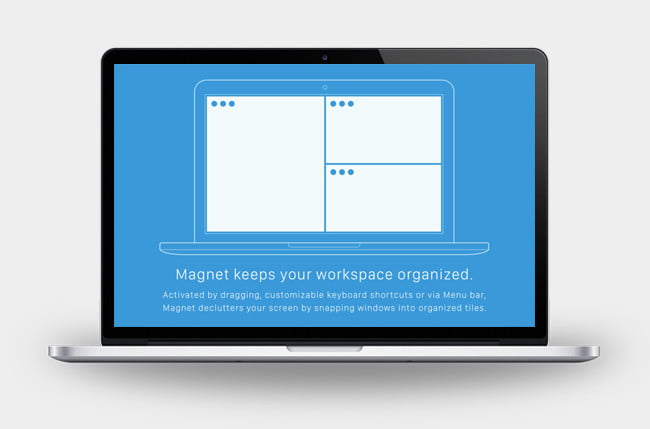 Ever since I purchased a MacBook Pro 2017 a couple of months back for the purpose of a school laptop, I have always been looking for new apps to help me be more productive when I am doing essays, notes, summaries, and quizzes. Recently I have found an OS X window manager app that makes me more productive on a small screen and that app is Magnet.

Magnet is available for MacOS and costs two dollars in the App Store. I was browsing the store one day out of pure boredom and I eventually came across an app that was in the Productivity category. I looked at the price of Magnet and I hesitated, as I hadn’t bought many paid apps in the past. However, as soon as I saw that it could allow me to view and interact with numerous windows on my MacBook without shifting apps or shortcuts, I was convinced to buy it. And I did. Here is my review.

What does it do?

Good question. Magnet allows you to simultaneously run windows side by side. This might not seem like much at first, but let me elaborate. Each app can be on either half of the screen (if you are using two) or each app can be in each respective corner of the screen (if you are using four). This neat organization allows me to glance between windows when I need to get information from one app and relay it to another. For example, I was typing up a research paper on different plants and trees and I constantly had to switch between tabs between Wikipedia and Google Docs. This was annoying me, as I had to take attention away from typing and had to move my cursor back and forth between tabs over and over again. However, I then used Magnet to put a tab of Google Docs on the left side while putting Wikipedia on the other: 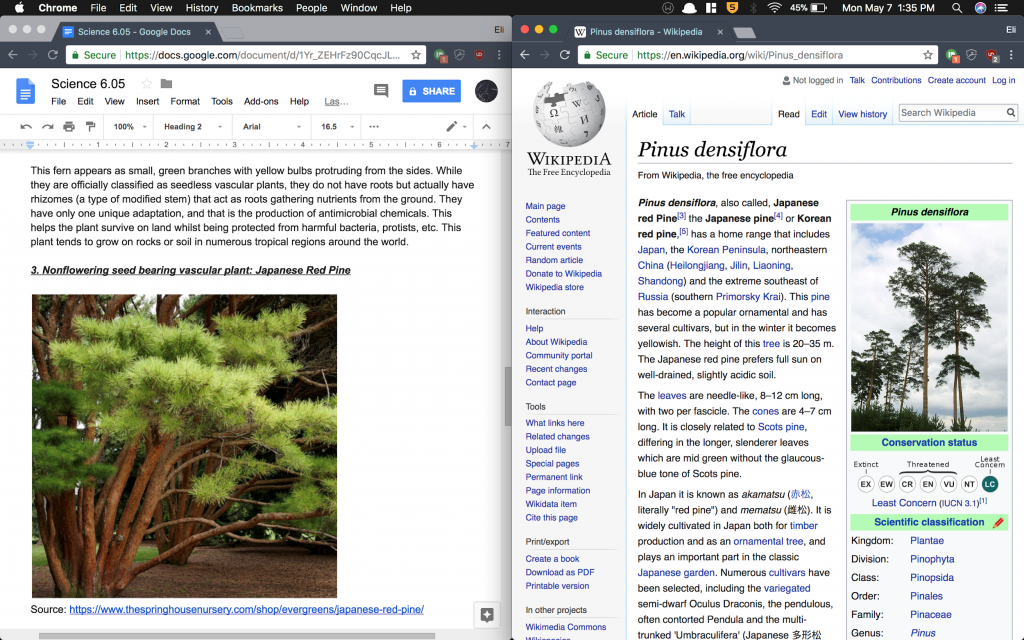 As you can see, I was able to easily look at the right of side of the screen, gather the information I needed and type it in without switching tabs or clicking a single button. This is the appeal of Magnet. Not only does it help me when I am doing research papers, it also allows me to view an outline for an essay whilst working on that very essay on the other side of the screen. This helps me keep track of my introduction, body, supporting evidence, etc.

Furthermore, I have found it useful for multitasking that does not necessarily involve work or school. I like to shop around in my browser but I also like to listen to music while doing so. I typically don’t like to leave Spotify in the background because I’m the kind of person who constantly changes tracks in their playlist, so I create an area for Spotify on one side and another area for Chrome on the other side. However, as seen in the screenshot, the Spotify window is way bigger than the Chrome window. This is one of my gripes with Magnet, which I will address below. 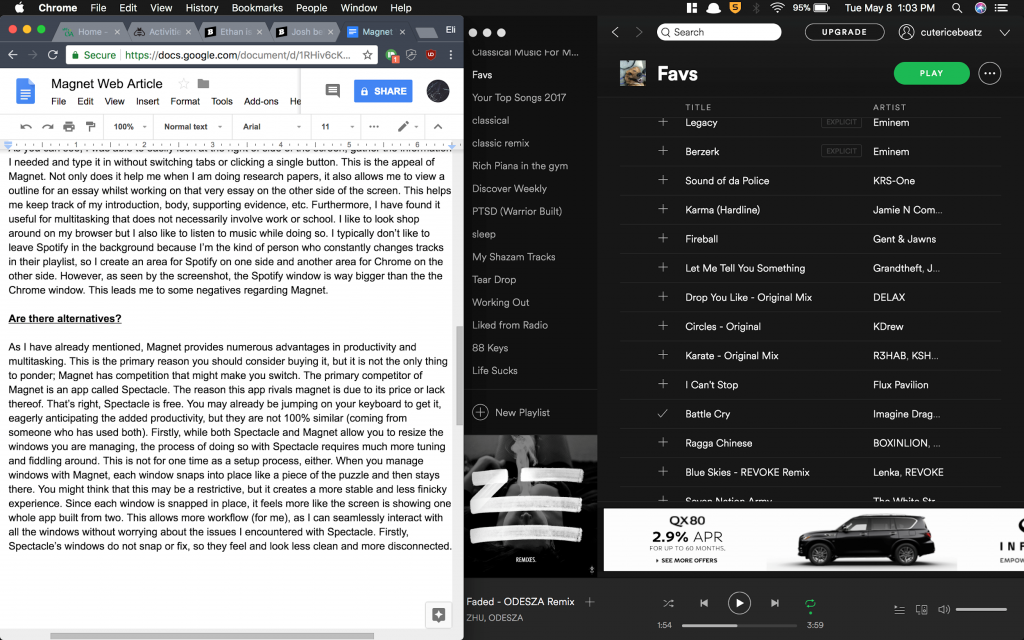 Are there alternatives and why would I want them?

As I have already mentioned, Magnet provides numerous advantages in productivity and multitasking. This is the primary reason you should consider buying it, but it is not the only thing to ponder; Magnet has competition that might make you switch. The primary competitor of Magnet is an app called Spectacle. The reason this app rivals Magnet is due to its price or lack thereof. That’s right, Spectacle is free. You may already be jumping on your keyboard to get it, eagerly anticipating the added productivity, but they are not 100% similar (coming from someone who has used both).

Firstly, while both Spectacle and Magnet allow you to resize the windows you are managing, the process of doing so with Spectacle requires much more tuning and fiddling around. This is not for one time as a setup process, either. When you manage windows with Magnet, each window snaps into place like a piece of a puzzle and then stays there. You might think that this may be restrictive, but it creates a more stable and less finicky experience. Since each window is snapped in place, it feels more like the screen is showing one whole app built from two. This allows more workflow (for me), as I can seamlessly interact with all the windows without worrying about the issues I encountered with Spectacle. Secondly, Spectacle’s windows do not snap or fix, so they feel and look less clean and more disconnected. 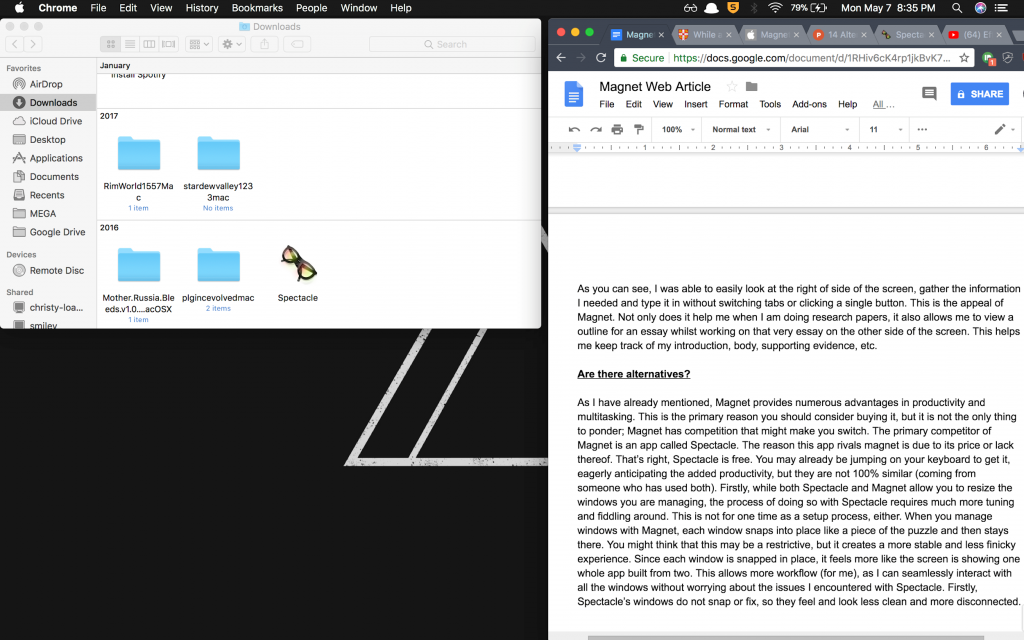 In addition, Spectacle feels less responsive. Whenever I have to move a window around or resize it, I have to click it twice around 80% of the time. When I do it in Magnet, it recognizes my first click. To add insult to injury, whenever I need to scroll or type something in another window, I always have to click that window in order to do so. This is my main gripe with Spectacle, as Magnet allows me to easily drag my cursor over and do what I need to without clicking or fiddling around.

However, Magnet is not free from troubles either. As I mentioned before, some windows simply take up too much space for what I do with them. As seen in the Spotify screenshot, I only needed it to show the playlist and not the entire app, which takes up more space on the screen. Magnet does not let me make it smaller as it claims that Spotify needs more space, but in Spectacle I can make it much smaller.

This along with its two dollar price delivers a firm one-two punch to Magnet. However, those are my only gripes with Magnet. In regards to impact on performance, I was concerned initially when I noticed that both apps run in the background constantly (duh). However, I have noticed no impact on battery life or performance with the apps running as my MacBook Pro is still as smooth as the day I got it.

Overall, I like Magnet. I realize that there are cheaper alternatives out there that do the same thing, but none of them do it with the polish or elegant simplicity of Magnet. Sure, it has some limitations and costs two dollars, but it has been a massive help to me not only as a student but as a person who likes to multitask. I understand it is not the most practical use of two dollars, but I do not regret spending that money.

Besides, do you think I’d know something about practicality if I’m using a MacBook Pro as a school laptop and movie/gaming machine? But I digress. If you are looking to take your multitasking to next level whether it be on a MacOS laptop or desktop, I think you should consider Magnet or at least its competitors. And yes, while it has done wonders for me with schoolwork, I still find myself occasionally winded by an all too familiar sense of procrastination. If I ever find an app that solves that, I’ll be sure to let you know.