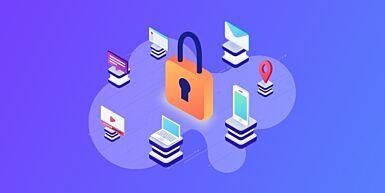 Since its inclusion in the Top VPN Providers for 2020, it made sense to dive a little deeper to see – how good is VyprVPN? In other words, I want to see if my privacy and security are actually improved when using this VPN or am I still an open book for anyone who wants to intercept or collect the details of my online activity.

The parent company of VyprVPN is Golden Frog which was founded in 2009 and based in Switzerland, known for its strong privacy laws. The VPN service provider has over 70 locations around the world, offering 200,000 IP addresses.

VyprVPN owns and operates 100% of its server infrastructure without relying on any third-party hosting. Also, VyprDNS is Golden Frog’s 100% owned and operated service available exclusively for VyprVPN users.

There is also a strict no-logging policy, backed up by an independent audit, to protect your online activity from being divulged to third parties.

OK, I am getting a bit ahead of myself here as I am excited to get into the nitty-gritty of this VPN provider’s capabilities. So before I do, let me spell out the criteria I typically apply when it comes to evaluating these services.

One of the assumptions for anyone reading this article is that if you are looking for a VPN service, you obviously understand its purpose as a tool to help increase your privacy and security online. Each one of us might have a very specific use case for needing a VPN, but the basic starting point is that we want to be more secure online.

This is where VyprVPN gets to shine as it has several security and privacy-focused features, some of which in my excitement I already gave away above. So here’s a list of what I like about using VyprVPN:

While it takes consistent oversight to protect VPN users’ data, I have to commend Golden Frog, VyprVPN’s parent company, for taking action based on an independent audit which revealed some areas of concern that needed to be addressed.

You can read the full audit report here and below is a summary view of the issues identified during the audit that had been fixed by the company.

The no-logging policy extends to the VyprDNSTM service which not only does not keep a record of your DNS requests, but also enables users to bypass DNS censorship imposed by oppressive regimes such as those of China or Iran.

Definitely handy if you are not too keen on the idea of your ISP spying on you and/or trying to profit from your personal data. It also helps getting around geo-blocking in countries like China.

Chameleon™ is available for the following platforms:

Wireguard® is a newer VPN protocol that is intended as an improvement over the older protocols such as OpenVPNTM in terms of speed and security. Wireguard® utilizes 256-bit encryption and is ideally suited for streaming content.

Another protocol to note here is ChameleonTM which is proprietary to VyprVPN and is most useful when you need to get around VPN blocks in countries like China or Iran. It masks VPN traffic via deep packet inspection (DPI) so it cannot be identified as a VPN connection and blocked.

If you absolutely do not want to risk any data flowing over the Internet unencrypted, VyprVPN offers a Kill Switch. This feature will automatically block all Internet and network traffic when VyprVPN disconnects or is not enabled.

This feature is only available when using VyprVPN on Windows or Mac. It can be configured to function at either the application or system level and requires you to be logged in.

Another security feature offered by VyprVPN is Public Wi-Fi Protection. It is very useful if you find yourself traveling a lot or spending time outside a trusted network environment where you have to rely on public Internet.

Well, all this security is great, but what about speed? After all, if you are hampered by a slow VPN connection, you most likely will not bother using this VPN for long or will abandon it outright. So I ran a few tests picking servers from closest to farthest out to my location.

For comparison, here’s what a quick test without using the VPN was like:

As you can see from the above numbers, there is a dramatic difference in download speeds if you are not connecting the VPN client to the closest server, which is usually chosen automatically by VyprVPN as a default.

Also, I would like to point out another aspect in this comparison, which is a huge difference between pings (15 ms vs 162 ms). This will be important to you if you are a gamer and will be using your VPN connection while gaming online using such services as Steam.

So using the ChameleonTM protocol that is proprietary to VyprVPN did not exhibit a significant difference between download speeds and even less so for the upload speeds. The ping times, though, were still vastly apart, approximately 2 to 1 (88 ms vs 160 ms). Gamers, keep an eye on this one!

If you have kept reading this far, I’ve saved the best speed test for last.

So while Wireguard®, being the newest protocol, proved to be the fastest when testing VPN connection speed, server proximity still made a significant impact in performance. This was most noticeable in the ping times as they, unsurprisingly, were affected by distance.

There is no shortage of devices or platforms on which VyprVPN can be deployed. I have tested the various apps on Windows, Android and Linux. On Linux, there is not really an app but at least two different ways VyprVPN can be set up which both worked for me.

I found it really simple to use on a mobile device using Vypr’s Android or iOS apps. The interface was consistent and clean on both platforms (Android and iOS, respectively): 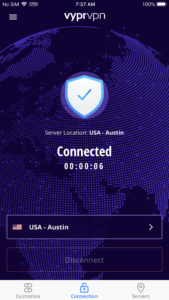 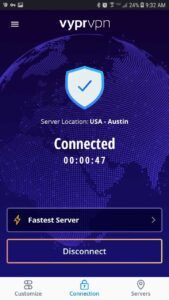 You can let VyprVPN select the fastest server automatically with minimal fuss or if you want to pick your own to unlock specific location-restricted content like Netflix, just click on the Servers icon on the bottom right and sort the server list by country.

And if you are inclined to tinker and tweak, there are detailed guides on the VyprVPN website for configuring manual connections.

Not the least of things to be considered when choosing a VPN service is its cost. While VyprVPN is not necessarily the cheapest, it offers a good value for the options and features included.

Pricing starts out at $12.95 per month if you don’t want to commit to anything longer. Obviously, you will realize greater savings with either a 12-month or 36-month plan.

Here’s a quick overview of the current pricing options at the time of this writing:

VyprVPN allows up to 5 simultaneous connections with unlimited bandwidth, so you can have it going on 5 devices at any one time connected to a different server on each if you wanted to. This is an average number of connections in the VPN industry, so if you need more than that there are other VPN providers like Surfshark, ProtonVPN or NordVPN.

You are also covered by a 30 day money-back guarantee and you can cancel anytime.

What Is VyprVPN Good For?

There are many different use cases for utilizing a VPN service. For me personally, I use it to increase my privacy online as well as protect my online activities (all legal, LOL) from extra snooping, be it my ISP, ad targeting, etc.

So where is VyprVPN going to be most useful? Well, I am glad you asked! Here are some potential applications where VyprVPN will be able to help.

Geographic restrictions: If you live in or find yourself traveling through a country which geographically restricts access to the Internet or particular content, then VyprVPN will be a good resource to have in your tech arsenal. Using its ChameleonTM encryption protocol, will allow you to circumvent geo-blocking restrictions in countries like China, Iran or Russia (among others). At the same time, this technology will also help you get around Internet censorship that may be imposed by one of the above jurisdictions.

If you are into using streaming services like Netflix, Hulu or similar, you may find that certain content they offer is only available in specific geographic areas. Selecting a VyprVPN server in one of the “allowed” locations will then enable you to stream any restricted content.

Online Anonymity: This is not exclusive to VyprVPN, but definitely applies to this service since it will allow you to not only hide your actual location, but also enhance your privacy by not keeping any logs of your activities online. That makes it impossible for any records of your activity while on the VPN to be shared with any third parties.

This makes VyprVPN quite friendly to using torrents since no record of this activity would be kept due to a strict no-logging policy.

Public Networks: This is one use case I find myself applying frequently when I have to rely on public Wi-Fi, which as I am sure you know is not the safest being either poorly protected or not at all. Connecting to the Internet while on such public networks via VyprVPN will protect you from snooping as well as potential hacking that frequently occurs on public or open Wi-Fi.

I do not have any reservations about recommending VyprVPN for securing your online activity. With its no-logging policy, privacy-focused jurisdiction, ChameleonTM and Wireguard® protocols and the wide availability of apps, VyprVPN has a lot going for it.

For additional privacy it would be nice to not have to register with your full name. Also, payment options should include cryptocurrency like Bitcoin, etc.

I also liked the support provided which is offered via email and instant chat. Additionally, there are detailed guides to help you navigate the apps, troubleshoot issues or manually configure such devices as routers. And, of course, there is a forum.

Please share any experience you may have had with this VPN provider in the comments below. Also, check out Top VPN Providers of 2020 for additional VPN options.

4 thoughts on “How Good Is VyprVPN – Enough To Get You Secure?”